The Palace employee had a fight with Harry and Meghan. “Like a couple of teenagers.” The problems started before the wedding. 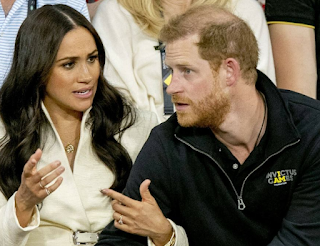 Meghan Markle and Prince Harry weren’t particularly liked by the palace staff. The Sussexes handled them rather bluntly, according to a royal insider.

According to Valentine Low, Samantha Cohen, Prince Harry and Meghan Markle’s personal secretary, was the couple’s biggest issue. Years after the famous Oprah Winfrey interview, the facts that painted the Sussex in a poor light came to light, despite the spouses’ complaints of mistreatment and lack of support.

Meghan Markle plotted her departure from the royal family?

Samantha Cohen was a seasoned palace employee with a solid reputation before taking the Sussex under her wing. She also knew Prince Harry and liked him.

Valentine Low revealed that tensions between Meghan Markle and Prince Harry and Palace staff first surfaced during the wedding planning. The American was not pleased with the suggestions made to her and was expected to reprimand someone for using crude language when dealing with them.

Valentine Low says Prince Harry’s frustration stemmed from the realization that his popularity with the royal family was declining. The expert notes that when the eldest son of Prince William reaches the age of majority in the line of succession, the position of the younger son of King Charles III will significantly weaken.

The book’s author also levelled a serious charge against Meghan Markle, citing the reports of Palace staff members. He revealed that she had intended to play the victim right from the start. Additionally, she was to be fully informed that her complaints would not be taken into account so she could later discuss this in the media.