Potatoes and tomatoes are one of the most common vegetables eaten around the world and these vegetables  are part of our daily diet, the good news in this regard is that according to experts, these vegetables can be helpful in the treatment of cancer. 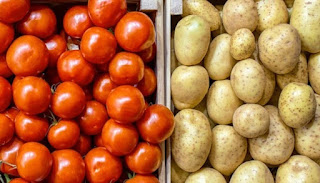 According to research done in Poland, a chemical compound called glycol cloids found in potatoes, tomatoes and eggplant helps in the treatment of cancer, but it can reduce the harms and side effects of chemotherapy during cancer treatment.

During chemotherapy, where cancerous cells are eliminated, healthy cells are also affected due to which the patient faces problems like hair fall, vomiting and physical weakness .

According to Polish experts, during the research, they examined vegetables with glycol cloids such as potatoes, tomatoes and eggplant, in which it was found that if given the right amount of this chemical compound, it can be very useful in treatment.

Experts focused on 5 components of this compound, which are believed to be developed in the future to treat cancer. During the research, it was found that five components of glycol cloids have the ability to kill cancerous cells and they also target cancerous cells that are resistant to cancer treatment drugs.

According to experts, tomatoes improve the cell system in the body, which helps to eliminate cancerous cells, but it is still researched how the chemicals found in vegetables combat cancer in human cells, it is also yet to be investigated which ingredients are important and safe for experiments in humans.

Polish experts say that scientists around the world are looking for a drug that is effective against cancerous cells, but at the same time it is also safe for healthy cells, so it can be useful to turn to plants for treatment, which have been used for various diseases for centuries.

However, experts also say that there is no research that has proved that eating these things for so many days every day will eliminate cancer cells, these things cannot be a substitute for cancer treatment  such as chemotherapy, radiotherapy and surgery.