Toothache is very painful, especially at night its severity gets worse. 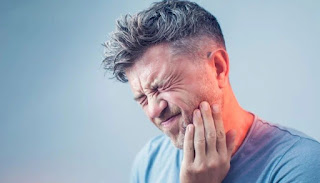 Toothache can make you a victim at any time, but experiencing it at night affects sleep.

One reason for this is that when a person lies down, the blood flow increases towards the head, which increases toothache.

Similarly, due to lack of engagement at night, the brain’s attention is more focused on toothache.

But the good thing is that there is no shortage of methods that can provide some relief and consult a doctor in free time.

Common painkillers available for headache or body pain can also be effective in relation to mild toothache, however, if the pain is too much, then the medicine should be used in consultation with the doctor.

The use of cold compresses is also possible to reduce toothache.

For this purpose, wrap a bag of ice in a towel and apply it on the affected part of the face or jaw, by doing this, the arteries in this part will reduce the pain by shrinking.

Keep the head high
The affected person may face additional discomfort and worm due to blood accumulation in the head, so placing one or two extra towels under the head can reduce the discomfort to a great extent.

Salt water is naturally sterile which reduces the worm and protects the affected tooth from infection.

The worm in hydrogen preoxide gums is usually the result of poor mouth cleaning, which also causes dental problems.

Never try to swallow this fluid and never test it on children.

According to the researchers, mint contains antioxidants and antimicrobial compounds, while menthol also numbs the affected area.

Clove is commonly used to reduce people’s toothache and it is really effective in this regard.

A compound called Eugenol in it numbs the affected area.

For this purpose, grind cloves and mix it in water and make a paste and apply this paste on the affected tooth.

Similarly, chewing a clove gently and keeping it close to the affected tooth can also reduce toothache.

This method is also not suitable for children because they may swallow cloves.

Garlic
Garlic is used in every household and some people also use it to reduce toothache.

For this purpose, chew a piece of garlic and leave it near the affected tooth, which can reduce the pain.

Since some people do not like the taste of garlic, this method is not suitable for everyone