If we talk about the extreme cold in front of me, I think of the people of the North Pole whose beards have snow or the climbers who reach the heights of Mount Everest. 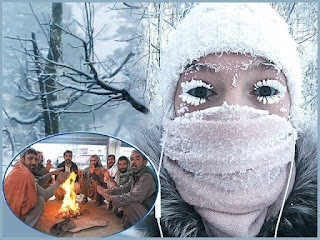 So when I was invited to experience a cold room, I was very surprised because the temperature here was only 10 degrees Celsius. Yes, 10 degrees Centigrade.

For me, it’s a very balanced temperature, not blood-clotting at all. The Arctic is not even close to cold. Surely we need a much cooler temperature to put our bodies in some kind of trouble? I was wrong.

Professor Damien Bailey from the University of South Wales told me, “It sounds balanced, but it’s a physical challenge. ‘

They invited me to their laboratory to explore the effects of cold houses on our bodies and why such balanced temperatures could be dangerous for our bodies.

“10 degrees is the average temperature people will have to live in if they can’t keep their homes warm. And in no time, I was going to know how badly 10 degrees Celsius can affect our heart, lungs and brain.

I was taken to an environmental chamber that was in a corner of his laboratory. The walls of this room were of iron and heavy and thick doors were installed on them.

In this airtight room, scientists can set the temperature, moisture content and oxygen level at will.

The first 21-degree breeze greets me as I enter here. The plan is to start at 21 degrees and then gradually drop the temperature to 10 degrees Celsius so that in the meantime, my body can react.

At first, many very modern instruments were installed on my body so that my body could be analyzed very closely.

Numerous monitors were installed on my breast, arms and legs to assess my body temperature, heart rate and blood pressure.

Professor Belle told me, ‘It looks like you’re like a Character in Star Wars.’ At the same time, they installed another sensor on my body with a wire. I was also dressed in a headset through which blood flow to my brain was to be monitored.

Meanwhile, drops of sweat appeared on my forehead. An ultrasound examined the carotid arteries in my neck.

(The sound of blood reaching the brain was encouraging me a lot) and in the meantime I was breathing in large tubes and that too was being examined.

All these measurements were completed. Now scientists knew how my body worked at 21 degrees Celsius. Now the fans start moving and the temperature of the chamber starts decreasing.

“Your brain is tasting your blood and it’s also assessing its temperature and now your brain is sending signals to other parts of the body,” Professor Bailey told me. Their purpose is to keep the temperature of my organs i.e. liver and heart close to 37 degrees.

I still didn’t know what effects it was having inside my body, but there were signs of it outside my body.

By the time the room temperature dropped to 18 degrees Celsius, I had stopped sweating and the hairs on my arms were starting to stand up so that they could keep the heat in my body.

“Science tells us that problems will start after 18 degrees, that’s the limit,” shouts Professor Belle. Now your body is trying to defend this basic temperature. ‘

Now my fingers began to turn white and cold. The blood vessels in my hands contract, so that they can preserve my warm blood for my most important organs.

This process is called vasoconstriction. It would have happened faster if my gender was different. Dr. Claire Eaglen of the University of Portsmouth says, “Women feel colder because estrogen hormones shrink the blood vessels in their hands and feet. That’s why we start getting cold quickly. ‘

For the first time, I felt shivering at 11.5 degrees Celsius. It was my way of moving and generating heat. The fans closed at 10 degrees Centigrade.

Now I was feeling restless but I didn’t feel too cold either. The scientists also took all the measurements again, and very soon it was clear to me that my initial opinion about the effect of 10 degrees Centigrade on my body was wrong.

Professor Bailey says, “Your body is very busy at 10 degrees. “What shocked me the most was how much the blood that reached my brain had changed and now I was taking too long to complete an image recognition game.

I would never want to do my school work in this cold room, or if I have dementia, I will not even come near such a room.

Professor Bailey says, “You are sending less blood to the brain, so the brain is getting less oxygen and glucose and its disadvantage is that it is adversely affecting your mental ability.” However, my body has been able to achieve its main goal and has maintained its basic temperature. Just to do that, he has to do more work.

My body is pumping warm blood all over the body and it is being done with more intensity. Meanwhile, my heart is beating fast and blood pressure is talking from the sky.

Professor Bailey told me that fortunately my ‘heart health is excellent’, but these internal changes are a threat to those who are elderly or whose heart health is already poor.

“We’ve learned from the evidence that cold is much more dangerous than heat,” he said.

“So I think there should be more awareness about the risks associated with the cold.” ‘

Winter usually provides support for infections that develop during the winter months, such as colds, etc. Similarly, pneumonia can occur due to lung infection, which is very common in cold weather.

Viruses also spread quickly in this season because we mostly live in closed rooms and are similar there, so there is usually no fresh air to flush out the viruses. Cold weather allows viruses to survive outside the body, and cold air also reduces the moisture that captures the virus.

Professor Akiko Owasaki, an immunobiologist at Yale University, says, “Air without moisture helps to transport viruses farther. They have also done experiments that show how if you breathe cold air, it affects the immune system in your nose.

“In such cold temperatures, your immune system becomes less effective and it makes it easier for viruses to grow in your nose,” Professor Owasaki told me. ‘

What to do to keep your body warm?

In an ideal world, we would want our room temperature to be 18 degrees. If that’s not possible, Professor Bailey says, “So you should prepare like you do before you climb a mountain.”

The precautions laid down by them are as follows:

Use clothing that helps keep you warm, such as fabrics made of wool

Eat foods that have a high rate of carbohydrates

Move to create automatic heat of the body, not sitting in one place and watching TV.