Stress that lasts for a long time can hurt your health. The following are the most significant long-term effects of stress:

Stress that lasts for a long time is the bane of our society. When we’re in a tough situation, we naturally feel a lot of nervous tension, which usually moves us to act. When stress lasts for a long time, it hurts the body and can lead to problems sleeping, anxiety, neurosis, and even depression.

Long-term stress is definitely bad for our health. It weakens the immune system, exacerbates the symptoms of many auto-aggressive diseases, e.g. Hashimoto’s disease , Graves’ disease or psoriasis

When our ancestor came face to face with a bear, an alarm signal “fight or flight” was sent to all parts of its body immediately. This signal was triggered by adrenaline – a hormone secreted in the medullary part of the adrenal gland. Under its influence, muscles tensed, heart beat faster and blood pressure rose.

That’s what stress was like . We react to it in the same way as our ancestors, except that we rarely encounter a bear on our way.

Stress can be caused not only by bad things, like fear, overwork, worry, illness, or the death of someone close to us, but also by good things, like sudden happiness or love.

Scientists have two words for stress: “eustress” and “distress.” The first one talks about what the body needs to be stimulated, without which we wouldn’t be able to do anything. For example, an athlete feels stress before a competition, which makes him fight harder and gives him the edge he needs to win. When he gets what he wants, he settles down. So eustress is positive stress.

Unfortunately, distress impedes concentration, diminishes stamina, and inhibits creativity. A student who has not prepared for an exam, for instance, fears that he will fail. So he cannot concentrate on the questions and frequently makes simple errors. His heart races, his muscles quiver, and his stomach refuses to comply. As a result, he fails, i.e., he does not achieve the objective, and therefore the tension is not alleviated.

Long-term stress is dangerous to health

The most dangerous is hidden, long-term stress – says doctor Ewa Matyska-Piekarska – It can be caused by problems in the home, at work, or with other people. When a person is in a stressful situation for a long time and doesn’t see a way out, his body starts to rebel against him. Our minds give out first. We go from being angry to not caring about anything. There are worries, trouble sleeping and staying focused, neurosis, and even depression.

People who live under constant stress complain of headaches and abdominal pain -. Fortunately, it is usually a temporary pain caused by strong, negative emotions. The most important thing is to take stress by the horns before it turns into a chronic, debilitating organism.

“Do you feel stressed while performing office duties?” If you are working in an ordinary private company or are also employed in a multinational company, then the answer to this question will come in the affirmative from the majority. 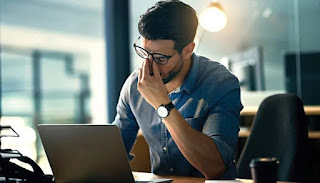 Because today in the 21st century, where the latest technology has accelerated the pace of work, humans are suffering from severe mental stress and work pressure in trying to take themselves forward in this race,  which is why “work stress” is at the top of mental health problems.

International research shows that more than 60 percent of the world’s population is currently suffering from work stress and to get rid of it, on average, medicines worth $ 26 billion are purchased every year, while organizations are also suffering economic losses of about $ 95 billion as a result of the pressure of this work.

It should be noted that financial institutions, especially those working in banks and security institutions, are most affected by the stress.

If stress is causing you to not perform properly in your office or workplace, or if performance is affected or you are not feeling strong, then you may be fired from the job or your business may be in danger.

For those in this situation, this sign requires immediate remedial efforts. There can usually be several factors for work stress.

For example, the fear of dismissal, the tiredness of working in the office for a long time due to excess work or lack of workers, the pressure to meet the expectations of your boss or client,  the timely completion of work that can make a good impression on others, lack of skill in your work, etc.

If we talk about symptoms, they include anxiety all the time, confusion, irritability, lack of interest in work, fatigue, lethargy, sleep dominance, inattention, poor stomach, insomnia and avoidance of socializing, etc.

If, god forbid, a person has such symptoms, it clearly means that he is suffering from mental stress and stress due to office or professional work or any other reason. Performance can be improved by taking several measures to get rid of work stress. Such as:

Remember , the first hour of the day constitutes the next twenty-three hours, so it is better to get up as soon as the sun rises early in the morning (rather than with the adhan fajr) and exercise for at least fifteen to twenty minutes after praying.

There is absolutely no need for much provision in this regard, because it has been seen that those who are in the cycle of more arrangements, they are not able to exercise, so it is better to jump for a while at one place in the house, then sit up or jump the rope for a while.

Although these are very simple exercises of a minor nature, they are so effective that in a few days you will feel a lot of improvement. Above all, this way you will be able to reach the office or workplace on time.

Be clearly aware of your needs in the office and this is possible only when you realize your responsibilities.

Also, you know what to do and what not to do when you reach the office in the morning. Remember, these two points are very important. If you work less than your responsibilities, problems will arise and if you do more, you will be under pressure, so maintaining balance in your work is the best strategy.

Avoid conflicts and quarrels, as they have negative effects on physical and mental health. Usually, office politics causes a lot of stress. And the precursor to this is usually small problems and minor differences, which also take the form of increasing hostility over time, or at least because of them, the concerned people become mentally stressed.

these foods daily and get the best sleep Nightmares

prepare us for real-life risks: Research

Relax the body,  sometimes the working seat or the place where the work is being done, keeps it so uncomfortable that mental stress is created. It is a fact that even a slight visible seat of sitting can lead to mental illness. A gentleman who was a computer operator in an organization. He often had pain in his neck and head.

They were advised to move their chair up and down, so that their head, neck and waist remained straight while working on the computer. He followed this suggestion, so within a few days the headache and restlessness went away, which was causing him severe fatigue and confusion, so be sure to check the proper lighting and rest etc. in your seat and place. If proper facilities are not available, arrange them.

However, the pressure definitely increases, which in turn affects the performance. Find positive ways to alternative to solving them quickly instead of doing several tasks together. A close friend or colleague can also be consulted in this regard.

If there is a break for prayer and food in the afternoon in the office, then use it, because while working from 9 am to 1 pm, the energy is less than a quarter. By taking a break for some time, the mind and body get rest, then energy is restored.

Restoring energy means increased efficiency. But people who do not take lunch breaks to save time due to excess work, they continue to reduce their performance further and instead of working more in less time, they are able to work less in more time.

Try listening to a thick conversational speech or audiobook on the way to the office or workplace. Whether you’re traveling in a car or on a motorcycle, in every two cases it’s possible to save audio files on your phone that are informative and motivational.

In this way, energy will be provided to the mind and the energy that is released from traffic chaos will also be relieved. Renowned personal development trainer and author, Robin Sharma, in his book “The 5AM Club”, has named this process as “Traffic University”.

You can avoid travel and not traffic, then turn it into a university. Continue the process of learning and improving yourself while living between travel and traffic. Apart from this, there are many other methods and procedures, which can be followed to get rid of the stress and stress of work. However, if the above points are followed, there will be a marked reduction in work stress.